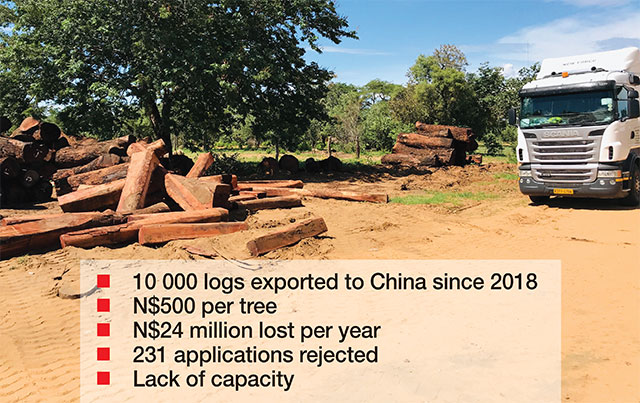 A new report exposes the government’s failure to curb the controversial timber trade, with revelations that 10 000 blocks of wood from northern Namibia have been exported to China and Vietnam since November 2018.

The report also reveals new concerns on the widening impact of timber harvesting: damage to national and other roads, increasing the risk of wildlife poaching, providing cover for smuggling illegal wildlife products, diesel pollution in forests, the possible extinction of some tree species, and the disruption and destruction of wildlife habitats.

Central to the report which was compiled last month is a picture of an agriculture ministry and other agencies that remain clueless when it comes to protecting Namibia’s rare forest areas.

“The inspection established that there are control weaknesses within the system, which require improvement,” the report said.

“Although the directorate of forestry uses marketing permits as a tool to control the transport of the logs, this is difficult to implement due to the high number of trucks and volumes of timber that were being exported,” the document said.

“The Directorate of Forestry issues the licences, but there is very little monitoring and enforcement on the ground due to limited manpower and transport,” the report said.

The ongoing controversy over the uncontrolled trade in timber resulted in the investigation into how forestry officials irregularly issued permits to harvest rosewood.

Internal auditors’ investigations of irregularities in permit issuance at the Walvis Bay forestry office were continuous, and near conclusion, the report said.

“The suspected official was relieved of permit-related duties at the office as investigations continue. Thus, an urgent replacement of the permit-issuing officer is required,” the government report said.

It’s not only a workforce shortage that is affecting the fight against questionable timber traders.

“The Ministry of Agriculture, Water and Forestry does not have a vehicle for conducting inspections at clearing agents’ warehouses and port,” the report said, recommending that vehicles be made available for inspections.

The report noted that around 32 000 blocks of rosewood timber from north-eastern Namibia had been transported since November 2018.

Of these, 10 000 [equal to 65 trucks] were exported to China and Vietnam, two known tropical countries which cheaply feed off the cutting down of rare trees from Namibia, one of the driest countries in southern Africa.

The report said based on an average selling value of N$500 per tree, these trees could generate an income of approximately N$24 million a year, overall, for local farmers.

“They are, therefore, an important source of livelihood to local farmers in the areas. The revenue from the exporting of these timbers is more difficult to determine,” the officials said.

The Namibian reported in March this year that the export of Namibian timber to China increased nearly tenfold – from 22 truckloads in 2015 to 208 truckloads in the first two months of this year.

These figures offer more evidence that Namibia’s timber continues to find its way to China, despite the government slapping a ban on the harvesting and transporting of timber.

“There is growing suspicion that timber cargoes were also being used to transport illegal wildlife products, including rhino horns and elephant tusks,” the officials concluded.

They said one such case is under investigation, and warned that any company found to be transporting illegal wildlife products in their consignments would have their operations stopped.

Inspectors also found that there was pollution from heavy trucks being serviced in forest areas, while large quantities of diesel kept on site, especially by Chinese nationals, is of concern.

The report also confirms that Namibia’s timber should not be exported unless it is for research or educational purposes, as stipulated in the Forestry Act regulations.

“These are highly durable and valuable hardwoods, and should not be allowed to leave Namibia without some level of local value addition,” the report stated.

“It has been observed that night-time operations were being undertaken once the moratorium was lifted.

This was of concern as it opened up opportunities for illegal harvesting as they are difficult to regulate. Animals may also have been displaced by noise, and there was an increased risk of poaching activities.”

WHOSE LAND IS IT?

The Namibian reported in March this year that members of the elite at Rundu, who lease government farms, had flooded the government with applications to cut down 200 000 trees in Kavango East.

The applicants include parliamentarians, government officials, councillors, police bosses, as well as traditional and church leaders – they are among 230 individuals who since November 2018 applied to cut down rare rosewood trees on land spanning 570 000 hectares. This is more than the combined size of Windhoek and Okahandja.

They claimed they wanted to cut trees, sell timber abroad, and use the profits to upgrade the government farms. They also claim it benefits communities, but this has yet to be shown.

The report clarifies who owns the trees.

“The trees that were harvested by small-scale commercial farmers are state-owned resources, and as such should be used to benefit the broader community in the communal areas. The trees are currently being treated as if they are the private property of the respective farmers,” the report said.

The environment ministry rejected the 230 applications for environmental clearance to cut down trees because none were considered detailed enough.

The ministry of agriculture and the individual parties were notified of this decision in early April 2019, the document said.

On top of that, the environmental clearance certificates could not be issued for timber harvesting because several national laws were ignored, such as the Environmental Management Act and the Communal Land Reform Act.

The report pointed to several negatives of the timber business: a negative impact on forestry regeneration; the possible extinction of some tree species; and damage to the environment.

“Destruction and damage of bird nesting sites, including hollowed trees. Animals may be displeased by noise, which could result in an increased risk of poaching activities,” the officials found.

Another concern is the lack of local level value-addition – most timber is exported in raw form as logs. There is now a recommendation to revive a timber factory in the Kavango regions.

The report made several recommendations that are now being discussed by the ministers of environment, and agriculture. The ministers will then present their report to the prime minister, before it is taken to Cabinet for consideration.

“The moratorium imposed on the commercial harvesting of timber should be continued indefinitely,” the report said.

However, it added, an exception could be made if the land is cleared for a green scheme or for agricultural production.

A Chinese company is accused of faking a green scheme project to cut down trees for timber.

“All farmers with timber that has already been cut but not transported should register the quantities of this timber with the local forestry offices”, the report said, adding that the estimated 20 000 logs at various farms and in storage at Walvis Bay should be transferred to a local wood-processing plant.

“Transit permits for the timber originating from other countries through Namibia could still take place, with intense monitoring throughout Namibia’s roads networks. Regional convoys may be organised where necessary,” the officials suggested.

Agriculture executive director Percy Misika could not be reached for comment. He confirmed two weeks ago that he had received the report, but declined to comment on it as it was still under discussion. 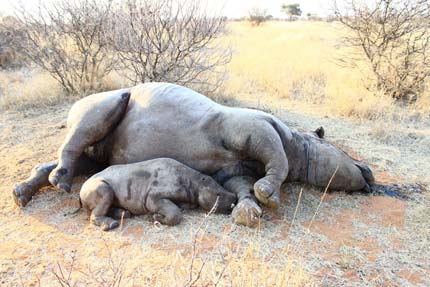 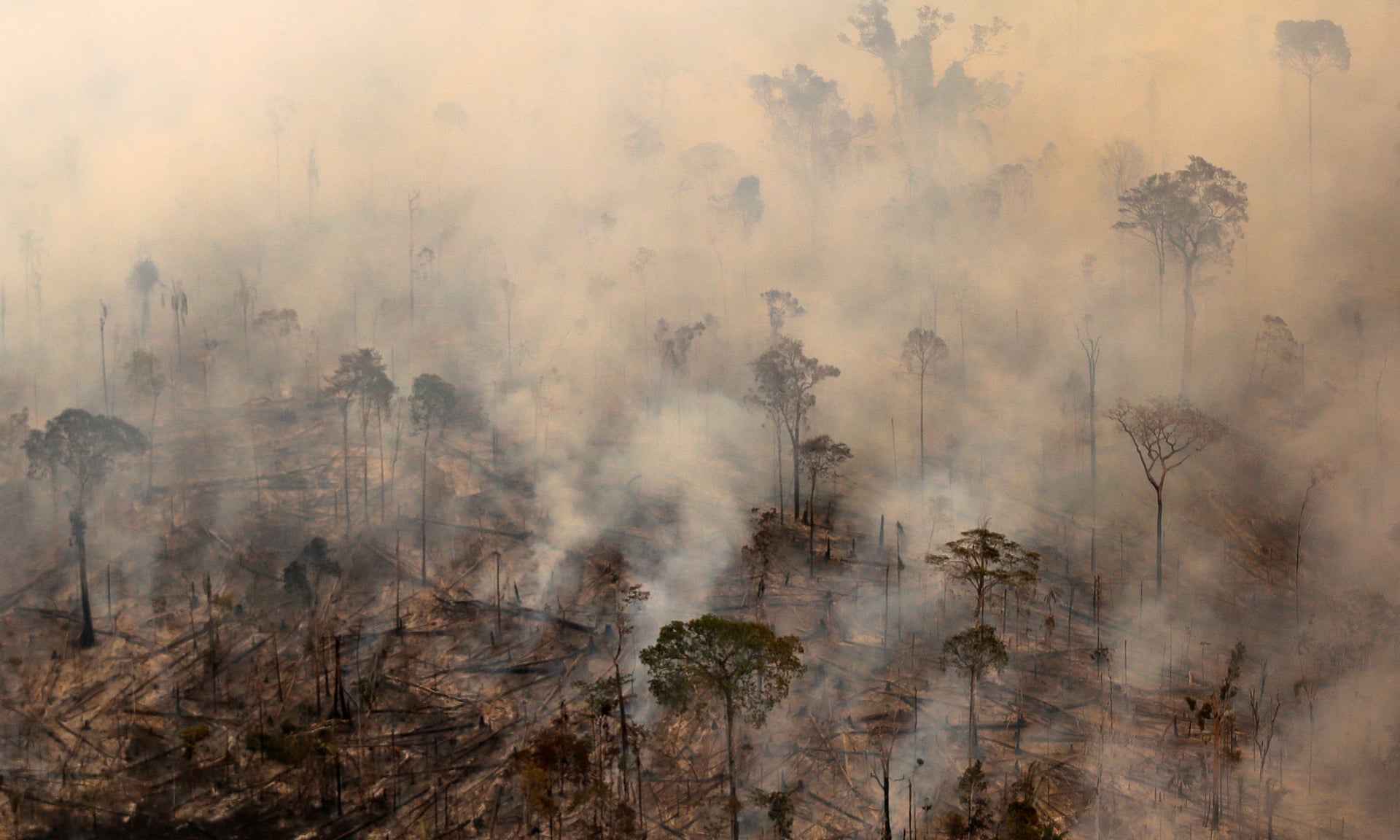