The amount of dead washed up cetaceans in the Gambia are rising to worrisome numbers. Yesterday another whale was found at Gunjur’s beach. Yes, the same beach as where Golden Lead Factory is operating. The species is confirmed to be pilot whale. Pilot whales are primarily teuthophagous (squid-eating) but also piscivorous (fish-eating). They are highly social and may remain with their birth pod throughout their lifetime. Feeding dives may last over ten minutes. They are capable of diving to depths of 600 meters, but most dives are to a depth of 30–60 m. Shallow dives tend to take place during the day, while deeper ones take place at night. 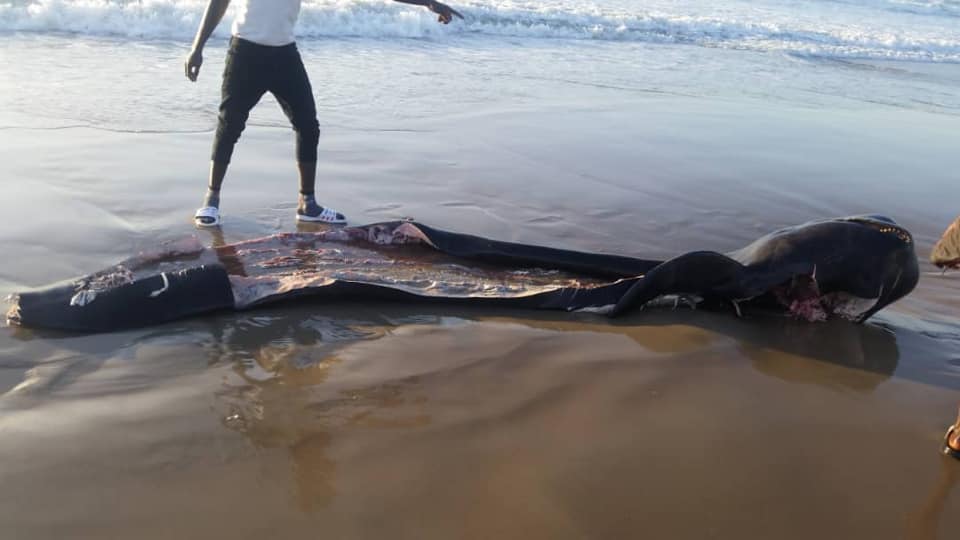 The dead pilot whale washed up Gunjur beach was chopped in pieces to use for food by the local people.

Cause of death unknown

Before the arrivial of environmentalists the whale was already chopped into pieces for food by the locals. The cause of death of the whale still remains unknown. It’s likely that either plastic pollution, or eating toxic fish caused the death of this animal. It is remarkable that this whale was found alone. They live in pods en when beachings happen, they usually beach themselves in large numbers. The cause of it’s death will always be a mystery.

It would not be surprising if the nearby Golden Lead Factory is responsible for the tragic death of this animal. Since Golden Lead Factory started operating in Gujnur, incredible amounts of dead marine animals are washing up on the Gambian beaches. The Gambian government allowed this company to install new pipelines which are dumping untreated waste from the factory straight into the ocean. The dumping of this untreated waste is causing huge problems for the marine ecosystem. Not only fish are dying but also birds, and basically all animals that eat fish.

For now, the complete uncontrolled and massive overfishing caused by the Barrow government in cooperation with Chinese investors. Is the biggest threat for the coming generations. We are literally dealing with a self destructive government that is doing everything for money. Another new fishmeal factory is going to be opened at Denton Bridge soon. Then we are also dealing with massive overfishing by foreign fishing vessels.

It’s not that the Gambia needs China to develop. China needs the Gambia to feed mouths. The Barrow is acting like everything is under control, but in fact we are completely emptying the ocean. We are fishing for the babies because full grown are already gone. We are stuck with a government that seems to think we can eat money.