As many as 145 whales have died after being found stranded on a remote beach in New Zealand, conservation officials said Monday. 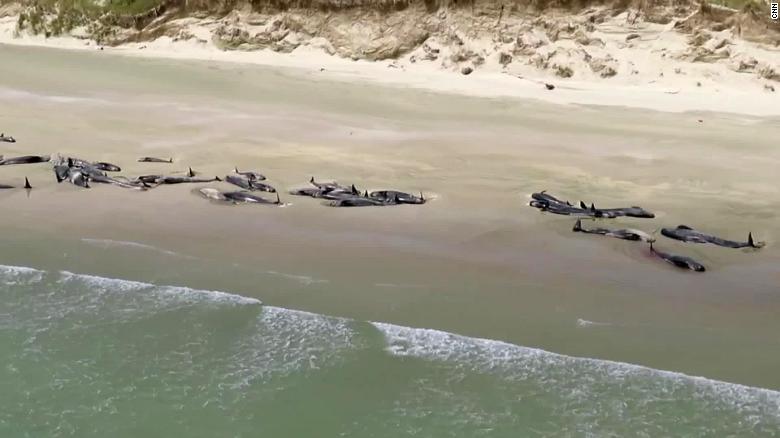 Two pods of pilot whales were discovered just over a mile apart on Mason Bay, Stewart Island, a sparsely populated island in the country’s south.

Authorities were first alerted to the mass stranding by a hiker Saturday evening. Half of the whales were already dead. The remaining animals were later euthanized, according to New Zealand’s Department of Conservation (DOC).

A Stewart Island operations manager for the DOC, Ren Leppens, said that the remote location and condition of the surviving whales made it impossible to save them. He described the decision as “heart-breaking.”

“Sadly, the likelihood of being able to successfully re-float the remaining whales was extremely low,” Leppens said in a statement. “The remote location, lack of nearby personnel and the whales’ deteriorating condition meant the most humane thing to do was to euthanize.

The incident is one of a series of recent whale strandings in New Zealand. On Sunday, 10 pygmy killer whales were found stranded on Ninety Mile Beach, in the country’s North Island. Two have since died, with efforts still underway to “re-float” the remaining creatures.
The DOC said that it responds to an average of 85 stranding incidents a year, although most involve single marine mammals rather than entire pods.

The exact reasons why whales and dolphins become stranded are not fully understood. Contributing factors can include “sickness, navigational error, geographical features, a rapidly falling tide, being chased by a predator, or extreme weather,” the DOC’s statement said.
Last year, around 400 pilot whales were beached in Golden Bay, on the tip of New Zealand’s South Island, in what was believed to be the third largest mass stranding in the country’s history.
The largest is thought to have taken place in 1918, when approximately 1,000 whales stranded themselves on Chatham Islands.
Source: CNN