Illegal fishing activities is a global concern. The Gambia government said they will leave no stone un turned to combat these illegal fishing activities known as IUU. It’s said that 90% of the world’s fish are either overfished or fully exploited and 23 billion dollars’ worth of seafood is stolen from the sea annually through unreported and unregulated fishing known as the IUU.

The Minister of fisheries and Water Resources in the press briefing with journalist last week 23th Oct. said that their government is very aware of the activities of IUU around the world. The minister said they have acquired two vessels that will conduct surveillance in the territorial waters. He said the vessel will be monitoring their ocean which is 200 nautical miles monitoring illegal fishing boats. He said the vessel is theirs; that they don’t have any money to pay for it right away, but its lease for seven years and that; in the first year they will pay nothing but will start paying in subsequent years.

He said the company will provide technical assistance to them for two years before they will take ownership of the vessel. In the same vein they are working to modernize the communication unit that will be used in their quest to eliminate IUU. He said the vessels are expected in February and they can spend two to three weeks in the ocean.

The minister said this statement when delivering the fisheries partnership agreement with the European Union worth EUR 900,000 per year.

As the combined financial compensation is EUR 5.4 million ‘The scope of the new agreement and protocol should enable this partnership to strengthen cooperation in the development of sustainable fisheries, the fight against illegal, unreported and unregulated fishing, the promotion of the blue economy including aquaculture and the support to artisanal fisheries sector’, he said.

The protocol represents financial contribution from the European Union EUR 550,000 per year including EUR 275,000 for access another EUR 275,000 for sectoral reform. An additional financial contribution of EUR 350,000 per year is from ship owners, in respect of fishing authorization. The agreement which is six-period is to provide legal certainty for operators, and financial guarantee for the Gambia, a reference of 3000 tons per year for tuna and tuna like species.

The minister said the sectoral reformed entailed the monitoring and controlling, and surveillances the fight against IUU that; it will also protect the fragile ecosystem that have made a significant contribution to the health of fish stocks such as the establishment and management protected marine areas from illegal fishing boat who sometime snitch into the area.

Per.sec Dr. Bamba Banja, Speaking to the Permanent Sectary, in an interview with the columnist, regarding the illegally, unregulated and unreported (IUU) fishing in the Gambian waters and around the world. The Pam Sect, said there is nothing sort of that, but they cannot completely dispel that fact, because the IUU fishing Activities are happening globally and Gambia is not an exception.

The pam. Sect said on the policies and consideration of the illegal fishing on the Gambian stock, he said as Government they put in place measures and policies to eradicate the effects of IUU in their waters. Dr.Banja said as a government they have support from the African Union through ECOWAS with a project that is focusing on the monitoring of the Environment and security in Africa.

The project name is MESA, Monitoring for Environment and Security in Africa. He said MESA has support the Gambia with facilities to be able to get information through satellite images regarding the fishing vessels operation in their waters.

He said through the support, they’ve been given transponders a radio or radar transceiver that transmits signal in response to receiving a predetermined signal. That it is has AIS Automatic Identification System which will be installed in each vessel.

He said they will be able to trace, whether a vessel is fishing in wrong zone, which is a punishable offence on the fisheries legislation. It will also notice whether a vessel has switch its transponder, and when that happen it means that something is wrong. He said from now to the end of the year they will enforce and ensure that all licensed fishing vessel operating in Gambia water has to have the AIS on board if any vessel don’t have it will not be given a license.

High sea control and arrestation of fishing boat MARCANTONIO BRAGADIN / DAK 1074.
Seizure of the fishing net by senegalese DPSP fishery inspectors. Illegal restriction ropes found attached to it in order to minimise the mesh size to catch undersize fish. Transfer of the net on a Greenpeace inflatable as evidence for the coming legal procedure.

Dr. Banja said no vessel has been caught fishing without a license since the new regime came in but they have arrested vessels for fishing in the wrong Zone and they have been fined penalties.

He added that the recent one was Chinese vessels who were fine a total of 1.million Dalasi which was later transmitted over to the police and the Navy. Later they were released.

He said other vessel and local canoes were also fine, depending on the contravention they breach. ‘The minimum fine is 500,000 dalasi for fishing in the wrong zone’. He said. He added that, they’re not allowed to fish further then 9 nautical miles or any canoe caught will face justice.

Dr. Banja added at the sub-regional level they conduct join surveillance with countries such as Senegal, Mauritania and Guinea Bissau to trace fishing vessel carrying out illegal fishing practices.

‘What people have to understand the issue of IUU is global problem happening even in the develop world’. He said IUU activities also happen in the rural areas in the tributaries ‘bolongs’ by foreign fishermen including Gambians.

He said by early next year they will be implementing the West-African regional fisheries program and that program will support Government in improving the management and development of their resources and helps putting measures in place to combat IUU. 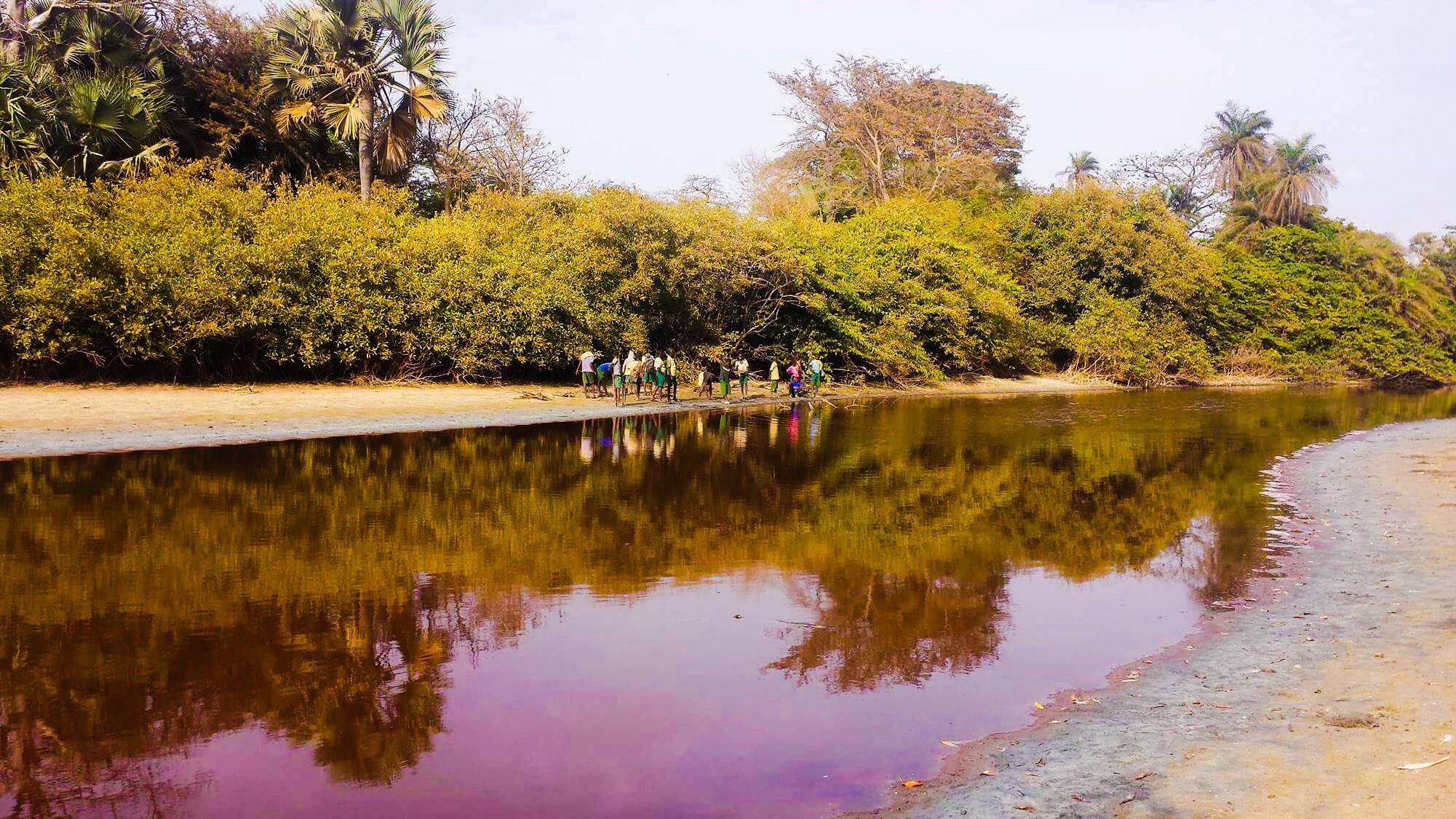 Fishmeal Facories are having a devestating impact on the Gambian environment. However, after many violations the Gambian government is still allowing Golden Lead Factory in Gunjur to operate. This Bolong Fenyo Wildlife Reserve was poisoned by the factory last year.

The Government of the Gambia said they monitor the fishmeal factories, trawlers in making sure the numbers are not above the recommended limit whereby the artisan operators will not be able to have access to fish.

The region loses an estimated $2.3 billion annually to illegal fishing

It’s that the region loses an estimated $2.3 billion annually to illegal fishing. The report said according to a recent study by Frontiers in Marine Science.

Illegal trawlers in the region use a number of strategies to pillage marine beds without being caught. In Guinea-Bissau, Greenpeace found that vessels turned off their automatic identification tracking system to move fish and supplies from one ship to another without recording the transfer.

The process, known as transshipment, has long been frowned upon by the international community because it allows vessels to launder illegally caught fish and continue fishing without returning to a port.

In Guinea, a Chinese trawler was found with shark fins on board, and small net sizes, which are banned because they help bring in a bigger haul. In Sierra Leone, trawlers from South Korea, China, and Italy were caught obscuring the names of their ships and missing logs of their total catch numbers. In Mauritania, large fishing vessels were also seen operating very close to local fishermen.

The report further states that, this illegal activity contributes to unemployment and desperation in the region and may push fishermen into illegal activities like piracy. The organization Oceans Beyond Piracy said the number of piracy incidents in West Africa is increasing while piracy has declined in recent years in East Africa, due to increased security.