Monday 22 may. Villagers of Gunjur in the Gambia, thought they already had experienced the worst as they found out today that their wildlife reserve Bolong Fenyo has been poisoned by the Chinese Golden Lead Factory. Everything is red, and every living thing is dead. Even the mangroves are dying. Villagers of Gunjur fear for their health and lives. ‘Our hearts broke today, and our anger has been fed to the limit.

The Bolong Fenyo Community Wildlife Reserve is a protected area owned by the community of Gunjur, covering 320 hectares. It has a very important and high diversity of avi-fauna. It is more importantly a roosting and feeding area for terns, gulls and other species.

The Bolong Fenyo Community Wildlife Reserve is gazetted in 2008 as the first national community owned reserve and  has been an area under close monitoring as an African Waterfowl Census area since 2000.

Bolong Fenyo Wildlife reserve, after the Chinese came and installed a pipeline for their waste water

Today a group villagers went into the wildlife reserve and were shocked by what the found. Instead of a beautiful healthy wetland full of birds and animals, everything was dead. Red from some kind of poison. While fearing for their health these people manage to fill a plastic bottle as a sample for research. With tears in their eyes they shot some pictures and went back home. Who could believe this would happen? These people responsible must pay for this now! 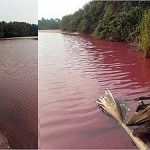 Complete devastation of a very important area is a fact now. This is not the first time. It happened earlier this month on the beaches of Kartong, Gunjur and even up to Kololi. The beach is covered in thousands of washed up dead fish every day. It smells like hell, no tourist want to be here anymore. Some people are even crying when they see the devastation of our coastline. Who is going to pay for this? How long are we going to accept this? Is it even possible for this area to recover or will it be doomed to die?

What happened in Gunjur this month

Not long ago the Chinese Golden Lead Factory in Gunjur was found with self-made pipelines which were going into the ocean. Another kind of toxic stuff was dumped here because it didn’t look red like like the Fenyo Bolong Wildlife Reserve. But it killed all forms of life too. Specific fish species like red and white snapper, captain fish and guitar fish already depleted according to local fisherman in Gunjur and Kartong.

Golden Lead Factory installed these pipelines on Gunjur’s public beach illegally. They are going straight into the ocean without any treatment of their waste water.

‘The government must act now and safe our future before it is too late. Our tourists will be gone soon. And then we are left with what? A completely destroyed and poisened environment? Who could ever survive here? We are being poisened right now and our fish stocks are depleting fast. This factory must close down right now and be removed. We want a protected area and a future for our children. We will fight for it till our last breath.’

‘This will be the end of our tourism in the Gambia’

This complete destruction is only the work of the first Golden Lead Factory based in Gunjur. The second factory is not even finished but will be operational very fast.

‘This one is even bigger then the one in Kartong. Can you believe the scale of environmental damage when the second one opens? This will be the end of our tourism very soon. It is not even possible to breath in some areas. Diseases could spread and we are afraid to eat our own fish.

We are crying for our children right now. It’s not even an option to close the factories. They have to be closed down and demolished before it is too late. We have to think differently in the Gambia, we have to think sustainable. Our environment is our future. We can not allow the second factory to open too’ stated Musa Manneh.

The scale of the JXYG Aquatic fishmeal plant in Kartong (just one village further) is unbelievable. At least the size of two or three football fields

Villager and environmental activist Omar Saho was threatend by the factory owners this week. First they tried to give him money, if he would shut his mouth. Saho did not accept the bribery and only said he was advocating for environmental issues because he was worried. Then the Chinese owners found out where he lived and threatened his mum and wife. Saho was scared but not in the country to help his family.

Another thing irritating the locals is the continuous dumpings of fish. Its been dumped everywhere. In the bushes close to the village and even lodges! ‘This is causing health problems. Other dumpings happen on the beach itself where mass graves are dug to dump all the dead fish in. Kombo area is turning into one big smelling graveyard’ tells a villager.

Illegal dumping of juvenile fish by the Golden Lead Factory in the Kombo area, the Gambia

Illegal dumping of juvenile fish by the Golden Lead Factory in the Kombo area, the Gambia

The protesters request for the Chinese company to be relocated is not going to happen. Hear Minister Gomez: “But who is the government? You think any government will accept people would just come and say relocate this and.. Have they done an environmental study; the people that are demonstrating? Have they done an environmental study that can tell you that if this is situated here it will create a problem? When these people applied, they had to do certain things.

The authority has to begin to say okay, if this factory is here, what is the impact? All the studies were done before the authority was given for them to start that factory. So, do you think my brother, any government would just sit and when a group come and say we don’t want this in this area and let move it to another place? And another group say let remove it and move it to another place.

Quoted from the Interview in Freedom Newspaper

This is what the local people feel about it

In our opinion this denial of facts will be the end of tourism. The greed for money is killing us here. We want clean beaches, we don’t want the filthy Chinese and Mauritanian jobs. We want to start Gambian companies and treat our environment sustainable. We need change our way of fishing and we need change in our way of thinking dear Minister Gomez. Completely, everywhere on the media we find articles about how West-Africa is exploited by the Chinese.

We have no shark left in our waters. How will the SOS turtle project in Gunjur develop under this pressure? Lat year was the first year in history that no leatherback turtles at all were seen on Gambian beaches. Which is pointing to the fact that the great Leatherback has gone extinct in the Gambia.

How many tourists want to see huge factories and smell dead fish all day in an area that used to be a paradise? Our tourism sector is in real danger, and that’s where our real, sustainable income is. Allowing these two factories to operate is the worst idea ever. Our complete ecosystem is already collapsing. What are we leaving for our children? This is just a greedy way of harvesting fish and making money quick until everything is gone.

There is nothing sustainable about this way of fishing. We will be left with an empty ocean. The Chinese will take their company and go to another country when the fish is gone. It is as simple as that. These plans are insane and should be turned back in order to save our tourism sector. How China is Expanding its Military Footprint in Africa 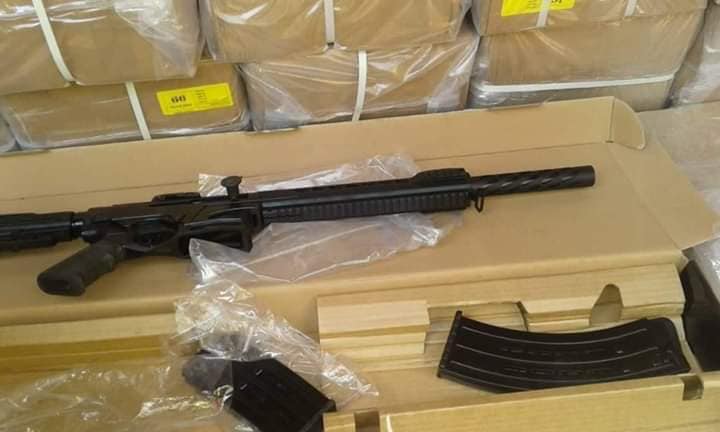