Activists across the country are planning a massive demonstration against the continued operation of the Golden Lead Fish meal processing company in Gunjur, The Gambia. 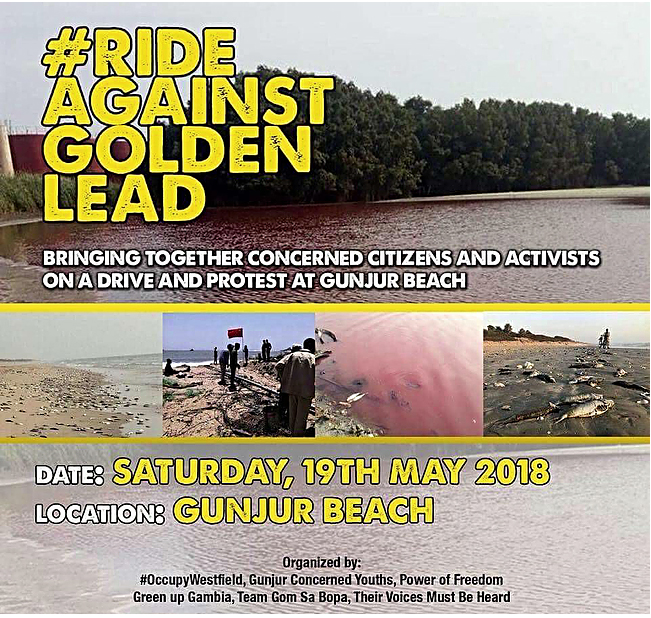 The planned coordinated demonstration follows the arrest, detention, charge of “inciment of crime” and release on bail, of 6 youths who planned to carry out a peaceful protest at Gunjur Beach to show their dissatisfaction on the installation of new waste pipelines by Golden Lead to discharge factory waste water into the sea.

The company installed the new pipelines following the removal of the initial pipes by concerned youths of the coastal settlement of Gunjur when an ultimatum was given to the factory which expired.

Golden Lead company returned the pipelines raising the Chinese flag in the process, following the approval of the National Environmental Agency (NEA) to the outcry of environmental activists and human rights defenders.

To make their position clear on the matter, Ministery of Environment on Monday called a meeting with the press in which a document was presented highlighting the reasons Golden Lead was given approval to continue discharging their factory waste into the sea.

Among the reasons was that tests carried out at the water resources lab in Abuko and at a well known lab in Senegal both indicated that the Golden Lead waste water contained “no harmful substances” which would be detrimental to the environment and aquatic life.

However, this claim was rebutted by Microbiologist Ahmed Manjang and other environmentalists including the former Exwcutive Director of NEA. Mr Manjang went on to release test results of the water sample from Bolong Feyno, where Golden Lead first discharged their factory waste. The test which was carried out in a laboratory in Germany showed starkly higher than maximum levels necessary for the protection of marine aquatic life.

Outraged with the recent developments of the failure of the government of The Gambia to put the long term health and livelihoods of the coastal settlements and by extension, The Gambian people over the economic benefit of the continued operation of the Golden Lead Factory, concerned pressure groups have come together to stage arguably, one of the biggest coordinated protest against Golden Lead.