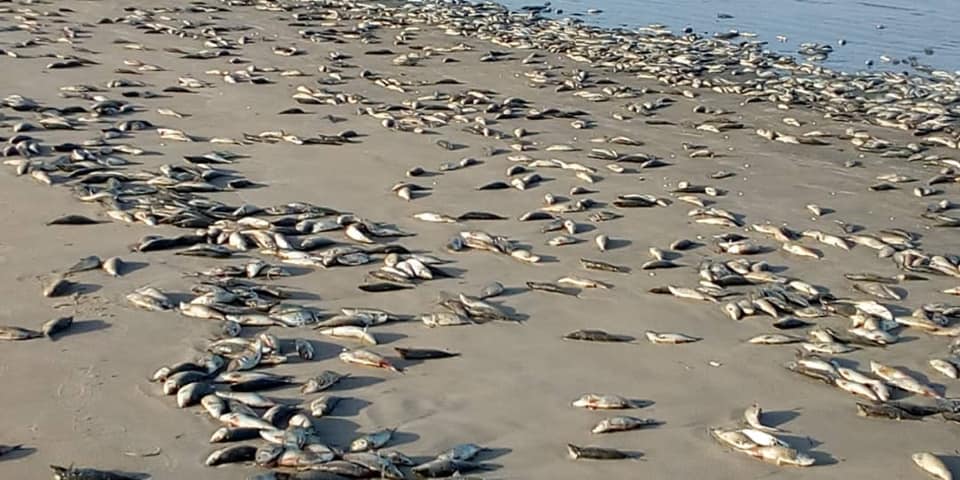 Sanyang, a coastal village in The Gambia has been struck by another environmental disaster as millions of dead fish wash up ‘Paradise beach‘. Local environmentalist shot this footage the 9th of may.

Since Chinese owned fishmeal factories are operating a true ecocide is taking place.

Three fishmeal factories are processing absurd amounts of fish on daily basis. The Chinese are offering local fishermen better prizes for their fish then the local markets.

As a result of this the prizes on local markets are sky rocketing. What once was the cheapest source of protein is now becoming unaffordable for many for Gambians.

How come millions of dead fish wash up the beach?

Unfortunately this is not the first time this is happening. Since the fishmeal factories are operating this has actually happened many times.

One of the reasons could be the massive dumping of untreated waste water into the ocean.

To create fishmeal, the factories produce large amounts of waste water. This waste water is highly laden with arsenic acid.

This same incident happened last year in Sanyang and Gunjur. Fishermen are dumping fish that is not wanted by the Chinese back into the ocean

The fishmeal factories are allowed by the government to dump their untreated waste water into the Atlantic ocean.

Not aware of how dangerous this waste water actually is perhaps. This should never have happened but is ongoing for three years now.

This dangerous level of very potent carcinogen being pumped at an industrial scale on daily bases. This is too dangerous to continue; it has to stop immediately.

Dr. Manjang warned the Gambian government for the consequences of the uncontrolled dumping but they never responded or investigated the case.

The Gambian NEA, National Environment Agency, is not turning up and still turning a deaf ear to the coastal villages.

According to our two independent test results, the fishmeal waste coming from Golden Lead Factory in Gunjur is loaded with proteinaceous material and highly carcinogenic metalloid; Arsenic.

Report # 39461706 of Reef Analytics shows that phosphate levels in the sample of seawater collected from the Bolong Fenyo Wildlife Reserve on 22 May 2017 are starkly higher than maximum levels necessary for the protection of marine aquatic life: Orthophosphate (PO 4 3− ) is a dissolved reactive form of phosphate.

Similarly, the concentration of nitrate in the sample of seawater collected from the Bolong Fenyo Wild Reserve on 22 May 2017 is quite high.

What was even more worrying being the level of heavy metal such as Arsenic and Arsenate, these two metalloids are powerful environmental carcinogens.

Arsenic is a natural metalloid chemical that may be present in groundwater. Ingestion only poses health problems if a dangerous amount of arsenic enters the body.

Their levels never exceed more than 23 micrograms /litre(ug/L), worryingly in our test results we obtained from Germany; Arsenate, the soluble form of Arsenic was 55ug/L, an aberration of 138% above average.

This dangerous level of very potent carcinogen being pumped at an industrial scale into fish landing site in Kartong, Gunjur and Sanyang on daily bases is too dangerous to continue; it has to stop immediately.

From: Open Letter To The Gambian Government by Ahmed Manjang

It is not unlikely that more people will show up with cancer and other diseases. The chemicals described above will sooner or later end up in the food chain of the people living in the coastal region.

In the raining season it occurred that waste water from the factory flooded from the tanks straight into the fields where goats graze.

It is hard to believe that this is actually happening. In every other country these people would be prosecuted for their crimes.

In the Gambia it seems that they can do whatever they want and get away with it time after time.

It is likely that the dead fish are coming from fishermen that dumped their catch at sea.

The possibility is still there that the the fish and large marine animals like dolphins and turtles are dying because of toxic chemicals.

Funded research could point out the exact reason but for now it still remains a mystery.

It is a fact that the fishmeal factories are the cause of the environmental destruction alongs the Gambia’s coastline. More dead turtles were also found in Gunjur this week.

Bribery is the main strategy factory owner are using to survive. By bribing village elders, local police and most likely politicians like Minister Gomez from Fisheries, they come away with their crimes. Time after time.

Last month Golden Lead Factory gave a cow as a gift to please the village elders of Gunjur.

Almost all fish stocks in West Africa are heavily overfished and depleted. The Sardinella, or locally called Bonga fish is about to collapse.

There are more and more days that local fishermen have no catches and go home empty handed. In the meanwhile, mega trawlers are catching incredible amounts of fish of few miles further. How is this sustainable?

This is the sad story of the Gambia and how a handful of Chinese companies brings an entire community in danger.