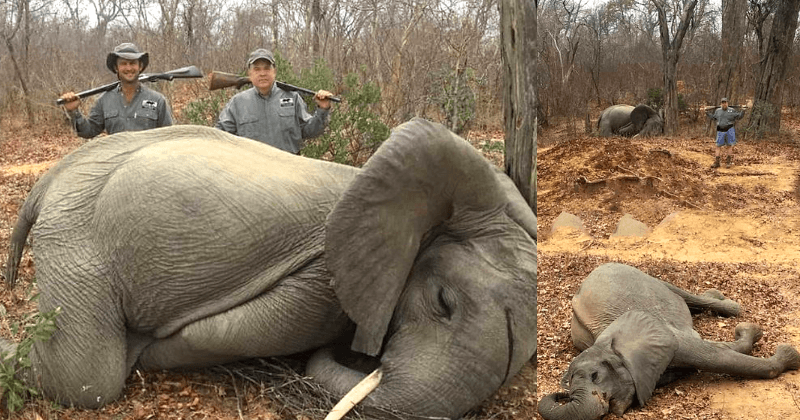 After receiving major backlash, Mike Jines, a partner of TopGen Energy, is claiming he did that for ‘self-defence.’

In the recent few years, humans have not only managed to disrupt the habitats of multiple animal species, but we have also completely wiped out some of them.

Day by day their numbers are declining and more and more animals are living with the constant threat to their existence.

While deforestation is sure a concern, one of the biggest reasons certain animals are endangered is because hunting is still a thing and people find pleasure in butchering innocent animals.

There’s apparently a sense of ‘pride’ in hiding and shooting animals from a distance which I’ll never understand. Pathetic losers.

A wealthy businessman from Georgia has made headlines for shooting and killing two baby elephants along with his hunting partner because when you’re rich, you can get away with anything, right? Not really.

Mike Jines, who is a partner of TopGen Energy, is now receiving major backlash after the pictures of his hunt went viral on the internet.

In the photos, two dead elephants can be seen along with Mike and his friend.

With their guns on their shoulder, the two men can be seen smiling in pride and posing for snaps while the poor dead animals lay lifeless on the ground with blood oozing out of their bodies.

The gruesome photos were first uploaded on Facebook by user Darrell Eisman.

“Apologies for the disturbing photo,” he wrote along with the photos.

“If you’re really upset by what you see, then make this go viral along with an email letting Mike Jines know what you think [sic].”

Darrell’s post was shared almost 100k times and people didn’t hesitate to let Mike know the kind of person he is and how ashamed he should be of his acts.

According to CBS, Mike is receiving so much hate that it has started to affect his business.

Jines, however, is claiming that he and his partner only shot the elephants because they were ‘charging’ towards them. It was self-defense.

He is “making sure people understand the actual facts as opposed to the mischaracterization on social media.”

In a statement, Jines said, “The two elephants that are shown in the photos were shot in self-defense in an unprovoked charge.

Both elephants were fully mature cows, not juveniles.”

He is also stating that the hunt was carried out lawfully in a designated safari area in Zimbabwe. Sadly, hunting is still legal in parts of the world.

Jines previously wrote about the incident in a hunting forum, “the hunt started with a bang . . . literally.

Less than thirty minutes into the first morning of the first day we experienced a double elephant cow charge.

This was obviously a first for me but it turns out it was a first for Buzz as well. We saw a group of cows from the road and decided to follow them to see if a tuskless was in the group.

We caught them quickly and identified a tuskless. We positioned ourselves to get a good look at the tuskless and concluded that since it was just Day 1 we would pass.”

“An instant later she came in an all-out charge. Buzz and I both fired two shots a piece and she went down. Then from behind us, a large one-tusked cow charged at full speed.

We each fired one shot and she crashed to the ground with her hind legs out behind her, indicating the speed and determination of her charge.

The two cows were less than forty feet apart with Buzz and I in the middle.

Fortunately, we had positioned ourselves in some open ground so we had good visibility when the charges came.

Certainly, a little more excitement than we had bargained for on Day 1,” he adds but people are calling BS on his claims.

People are taking to their social media to express their rage. “It is such a sad situation, that these barbaric men can kill these beautiful animals and get away with it!” commented a user.

“That is not a trophy. You have nothing to be proud of. NOTHING! How disgraceful and disgusting and low life to do this.

You didn’t give this baby life and you sure have no right to take it away. I pity you for you indeed reap what you sow,” commented another.

#topgenenergy needs to die a quick death just like the 2 defenseless elephants these sociopaths killed. Those were babies that belonged to a mother. Those mother elephants are grieving their deaths. These men are like cancer on the planet. https://t.co/IMjxHBgm5u

Mike has been receiving death threats and he also has something to say in return.

“While I can appreciate that hunting can be polarizing and that views on hunting can vary materially, I am sure that you can appreciate what it is like to deal with the vitriol particularly when the underlying information in this case is inaccurate.”