Animal rights campaigners have voiced fury at the Zambian government’s decision to allow trophy hunters to kill 2,000 hippos in a five-year ‘cull’.

The government announced the plans to eliminate 400 of the animals a year in 2016, claiming there was a risk of an anthrax outbreak.

Zambian officials initially climbed down but the charity Born Free said the cull has secretly been restarted under the guise of a ‘wildlife management tool’.

The cull has been promoted to trophy hunting companies who have in turn offered ‘management hunts’ to customers.

These hunting trips are organized by Umlilo Safari’s.

One of the hunting firms, based in South Africa, offered a six-night expedition in Zambia with ‘five hippos per hunter’ for £10,500.

Born Free said on its website that Zambia’s Department of National Parks & Wildlife (DNPW) had failed to provide any evidence of overpopulation.

They said: ‘DNPW has failed to provide credible, scientific evidence to show that such an indiscriminate hippo cull of healthy animals would prevent a future outbreak of anthrax.

‘Scientific evidence suggests that culling hippos stimulates breeding and ends up increasing the population, potentially establishing a vicious cycle of death and destruction.

‘Born Free is opposed to the killing of any animal for sport or pleasure.

‘We contend that there is no evidence that supports the need to cull, as expressed by the authorities.

‘We also firmly believe that hippos are worth more alive, as part of the Luangwa Valley ecosystem and a spectacular part in Zambia’s incredible wildlife tourism sector, than dead.’

One hunting website gives its prospective clients advice on how to take down a hippo, saying it can be ‘terrifically excciting’.

The World Wide Fund for Nature describes the hippo as ‘vulnerable’.

Wild hippo numbers across Africa are under growing pressure, with a maximum estimate of just 130,000 animals, according to Born Free. 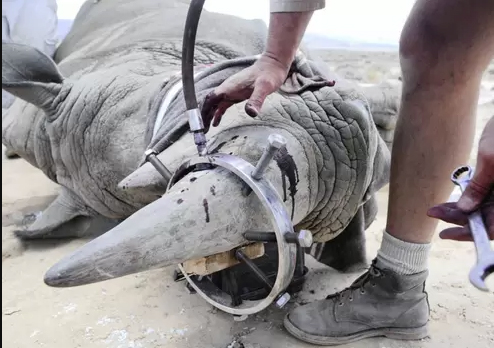