The Planet Loses 40 Soccer Fields Worth Of Forests Every Minute 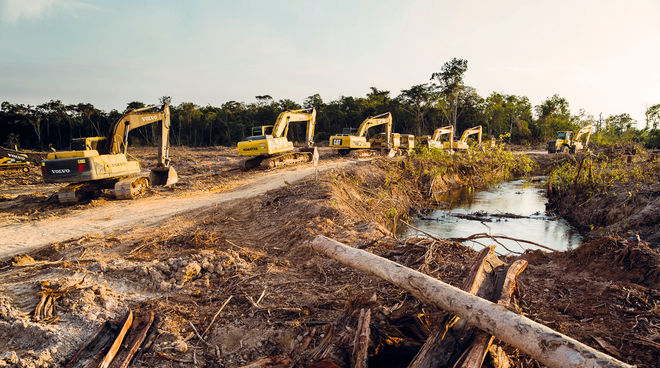 In just 10 years the planet has lost 945,345 km2 of natural forests, a little over the total size of Venezuela. The rate of loss of forest covering has doubled since 2003 and the deforestation in tropical rainforests has also doubled since 2008, according to The Global Forest Watch of the World Resources Institute (WRI).

In other words, every minute, the planet loses a stretch of forest equivalent to the size of 40 football fields.

This is also contributing to global warming – and, consequently, to climate change – given that greenhouses gas emissions are being released into the atmosphere because of changes in land use.

Above all, carbon is accumulating in vegetation biomass (leaves, roots and tree trunks, for example) as well as in the soil.

Without vegetation cover, that same carbon, which has been stored under the earth for years, ends up being released and contributes to the increase of the globe’s temperature.

“Deforestation is the second biggest cause of climate change, after fossil fuels.

It’s worth remembering that 2,000 million tons of carbon dioxide are absorbed into the trees every year, converting forests into large storage,”

Douglas McGuire, coordinator of Landscape and Reforestation commission of the United Nations for Food and Agriculture Organization (FAO, by its English acronym).

Faced with this prospect, Fritz Hinterberger – scientific director and president of the European Institute for Sustainable Development (SERI)- said that climate change and “deforestation will lead to an increase in prices of agricultural products, and the consequent increase of worldwide poverty.

As a result of which we ought to review our consumption models, promote new lifestyles and a dematerialized circular economy.”

Both McGuire and Hinterberger were amongst the group of scientists, environmentalists, politicians and international journalists brought together by the organization Greenaccord in the city of San Miniato (Italy) on the occasion of the 15th International Forum for the Protection of Nature that this year held under the title “Lungs of the Earth: forests.”

What we lose by deforestation

For Sergio Baffoni, coordinator of the campaign for the forests by the Environmental Paper Network, climate change is not the only negative impact brought on by deforestation.

“Eighty percent of the earth’s biodiversity lives in forests and, of this percentage, 250 species disappear per day,” Baffoni said. “We are losing species at a rate between 1,000 and 10,000 times quicker than the norm.

We are witnessing the worst crisis since the extinction of the dinosaurs 65 million years ago, primarily due to the loss of forest habitats.”

“A forest does not disappear when the last tree dies, it disappears a long time before, due to the delicate relationships established between organisms.

The forest starts to disappear when it is broken up,” said Andrea Masullo, scientific consultant of Greenaccord, who added that the planet needs to regrow 1,000 million hectares of fragmented forests.

“We are especially worried about the deforestation of the three large regions of the world where there is a greater percentage of forests: the Amazon, the Congo and South East Asia,” said Alfono Cauteruccio, president of Greenaccord.

Andrey Laletin, president of the organization Friends of the Siberian Forests, added: “In Siberia we have another of the green lungs of the planet and the woods occupy 515 million hectares, 40 percent of all the territory, and harbor 20 indigenous populations.

All these forests are growing in permafrost: the growing number of forest accidents has meant that methane gas has been released, a gas 39 times more dangerous than carbon dioxide,” he said.

The reason behind deforestation, according to FAO’s 2018 report on the State of Forests and referenced by Baffoni, is the change of soil use within the agricultural and livestock sector.

For Masullo he is curious that the agricultural organizations are seeking forest areas arguing for a high quality of soil, which will lead to high fertility, but “the quality of the soil is good because there is a forest present.

Because of the change of use, when it passes from wood to crops, this quality is lost because the forests are clearly disappearing.”

Furthermore, because of deforestation, environmental services are out of action, such as hydro and thermal regulation, pollination, protection against disasters, foods, components for pharmaceutical and cosmetic industry, amongst others.

“The forests represent the balance and stability within the ecosystem. However, each year we lose 16 million hectares of forest.

These are astonishing figures and they should be enough to start immediate action since forests produce oxygen, filter air, regulate the humility of the surrounding area, absorb enormous quantities of greenhouse gas and provide refuge and sustenance to local populations.

Forests should be considered universal resources because they guarantee the equilibrium of the planet and because their protection means the protection of all humanity, but instead, they depend on the weak legislation of every country,” said Cauteruccio.

Furthermore, entire populations are economically dependent on forests. An example of this is San Miniato, whose edible fungus truffle is used as a spice in Tuscanese cuisine and is the economic driving force of the city. Sustainable forest ecosystems are necessary for its production.

“San Miniato is the world capital of truffle and I can guarantee that this precise fungus would not be growing if we had not applied environmental policies to look after our region in the last 50 years.

We have managed to improve our economic input with regards to the environment,” said Vittorio Gabbanini, mayor of this city.

But the other facet of this story involved the communities whose way of life depended on the forest whose livelihood has been removed by deforestation.

“Deforestation is a tragedy which affects the lives of more than 1,000 million people that live in forests or near them, who are obligated to move as desertification advances. Each year, about 200 people die trying to defend these territories and the number is constantly increasing,” said Baffoni.

“Deforestation is driven by the market, not by the poverty”, said Baffoni, who added: “the principal driving forces of deforestation in the whole world are no longer farmers trying to put food on their tables, but rather major corporations converting large stretches of land into agricultural industry.”

These corporations depend on the consumerism of the people that contribute to the market.

Jinfeng Zhou, secretary general of the China Biodiversity Conservation and Green Development Foundation, used the example of the pressure exercised by the sticks – used in the service express or in take away food – above the forests.

Per year, 45,000 million of these sticks are consumed in China. To fulfil this, 25 million trees have to be cut, which therefore means a reduction of 2 million m2 of forest covering.

This is hugely significant in a country like China where forest covering is hardly 16.55 percent, much less than the world average of 27 percent.

“The current economic system, that is based on the production-consumption-waste is an enormous monster that feeds on bigger and bigger quantities of natural resources without allowing regeneration,” Cauteruccio said.

“It is when economic interests take precedence over the protection of nature that the consequences are disastrous, with a huge loss of biodiversity, contamination of water supplies and indigenous populations obliged to emigrate.”

Along the same lines, Marco Marchetti – professor at the University of Molise in Italy – advocated for returning to the concept of citizens instead of customers. “It is not enough to be sustainable, we have to be responsible,” he said.

Furthermore, Marchetti said: “we are living in an age of cultural disconnect.

We ought to return to a lifestyle that brings us back to rural life and that, for better or worse, keeps us closer to nature.

General Davide De Laurentis, vice-commander of Forestry in the Environmental Society and of Agricultural in the Army of Policemen, agreed with Marchetti.

“In order to tackle the environmental questions day to day we must shine light upon our lifestyle, about our consumerism and about our current development models which ought to be revised.

We need a Copernican revolution capable of inserting the value of the natural preserved capital into the cost of the progress of a nation,” said De Laurentis.

Zhou went a step further and spoke about incorporating the Natural Capital within the dynamic economy of countries. In fact, he proposed to measure the growth and the progress by the Gross Ecological Product instead of the Gross Domestic Product.

In his case, and align with the efforts of the foundation which he represents, Zhou is encouraging a change in article 26 of the Chinese Constitution to make the government even more responsible for reforestation with a focus on ecosystems, that not only acknowledges trees but also the infinite existing relationships between organisms.

While McGuire agrees with Zhou and Marchetti about the vision of the ecosystem, he also said that the forest plants can be a tool to relieve pressure from natural forests.

“In terms of forest plants, we should understand their importance and necessity, although they do not guarantee the same level of biodiversity. In some areas of the world we could use reforestation to respond to specific emergencies and alleviate the load of natural forests,”.

In 2020, the worldwide challenge is to regrow 250 million hectares. “It’s an ambitious plan, but many countries are working seriously on it,” said the official from FAO.