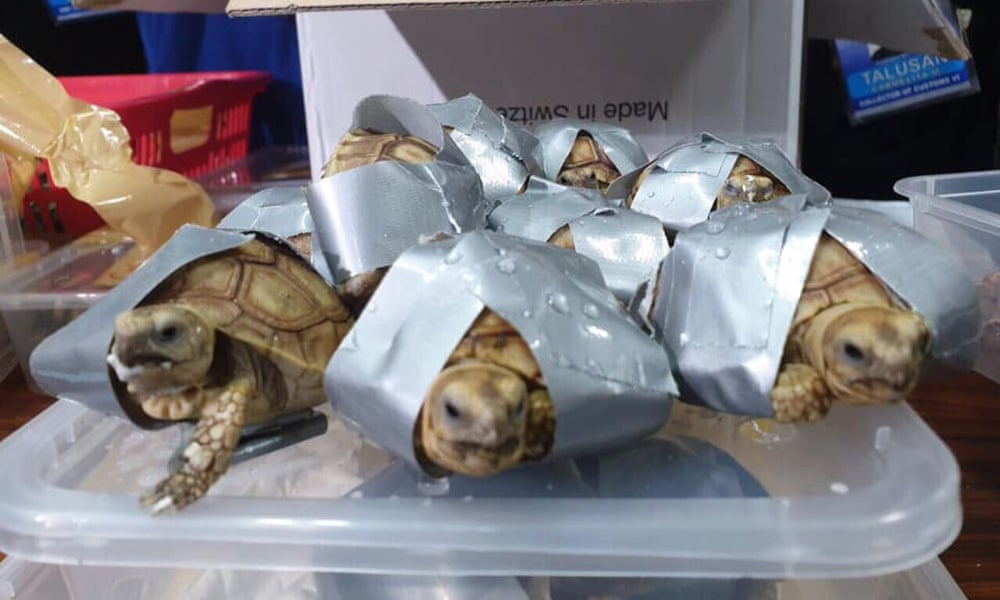 Police in the Philippines have discovered 1,529 live turtles wrapped in duct tape inside suitcases abandoned in an airport.

The customs bureau seized four suitcases in Manila on Sunday and found they were filled with rare and protected varieties including star tortoises, red-footed tortoises, sulcata tortoises and red-eared sliders.

Officers said the cases had been brought on a flight from Hong Kong by a passenger from the Philippines and left unclaimed in the arrivals area of Manila’s Ninoy Aquino international airport.

The reptiles were valued at up to 4.5m pesos (£60,000). There is a high demand for turtles as exotic pets, and they are valued for their meat and for use in traditional medicine in some Asian countries.

The Philippines has strict laws against animal smuggling and, if found, the carrier could face up to two years in jail and a fine of 200,000 pesos.

Wildlife smuggling is a problem throughout south-east Asia. The Philippine customs bureau seized 560 types of wildlife and endangered animals in 2018.

Including 250 geckos, 254 pieces of coral, and multiple species of reptile, and in 2019 it has already discovered 63 iguanas, chameleons and bearded dragons in parcels, airline baggage and international shipments.

The turtles have been transferred to a monitoring unit for safekeeping.