This island was on the brink of disaster. Then, they planted thousands of trees 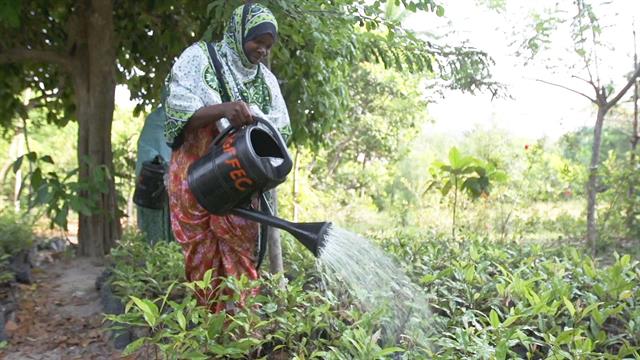 Until recently, the people living on the island of Kokota thought their forests were lost forever. The tiny Tanzanian islet measures only one square kilometer and is home to just 500 people. Situated in the Zanzibar Archipelago, the island of Kokota has become an example of people adapting to climate change.

For centuries, Kokota’s residents subsisted by harvesting the island’s natural resources, including its trees. By the early 21st century, though, the deforestation had become unsustainable and the islanders faced a crisis. Fisheries were depleted, which threatened the Kokotan’s food supplies, and rivers ran dry, which left people with little water to drink or cook with.

Kokota’s residents also faced threats largely out of their control. A changing climate has meant the island is now experiencing rising sea levels, more erratic rainfall, and coral bleaching in the surrounding waters.

But in recent years, the island has managed to step back from the brink of ruin. Reforestation efforts began on Pemba in 2008, and since then, more than two million trees have been planted there and on Kokota. Kokota also has its first school as well as a system for collecting rainwater. Though small, the island is an example of how a community can successfully adapt to the growing challenges created by climate change, its residents say.

A resident of Pemba Island, Mbarouk Mussa Omar was visiting friends on Kokota in 2007 when he saw people had barely enough water to survive. At the time, he was working for a Tanzanian conservation NGO, so he had experience with local grassroots organizations. He teamed up with Jeff Schnurr, a 21-year-old tree planter from Canada who was living in Pemba at the time. Tree planting is a popular summer job for young people in Canada, and Omar was interested in bringing the practice to Pemba.

Together Schnurr and Omar created the non-profit Community Forests International (CFI) and recruited other Canadian tree planters living abroad to launch their restoration project. They also started Community Forests Pemba to involve local community members in the tree-planting. Seedlings were grown on Pemba, where water is more abundant, and surplus was sent to Kokota.

Omar says enthusiastic volunteers on Kokota usually help plant trees during the rainy season, when water is plentiful. At other times of the year, the biggest challenge they faced was finding adequate water sources for their growing trees. Freshwater was so scarce that residents were sailing hours, depending on the wind, to buy drinking water in Pemba.

CFI also built Kokota’s first school, with funding from the European Union Global Climate Change Alliance. The building was built to be able to harvest rainwater. The school’s tank can hold 250,000 liters (about 66,000 gallons) of rainwater, and a second reservoir has since been built to store even more. The water can now be shared with the community.

“It wasn’t going to be a climate-change solution unless it was also an economic solution,” says Zach Melanson,co-founder and communications director for CFI.

Melanson says the conservation group is now devising ways for Kokota to make more money by diversifying its agricultural exports with crops that grow well in its climate. A variety of different tree species have since been incorporated into the reforestation efforts, many bearing valuable fruits and spices.

Today, Pemba produces cloves, cinnamon, and nutmeg, hearkening to the days of the spice trade, when the islands of Zanzibar were early trading posts for sailors traveling from Arabia to Africa. Pemba sells some of its spices to cosmetic manufacturer LUSH, and Melanson says Kokota could potentially do the same.

CFI has also worked with local women to help them grow more and different vegetables in their gardens. Women on the island are often tied to the home and don’t have the same land rights as men. With more diverse gardens, though, they can eat and cook a more nutritious diet and sell excess vegetables at markets, giving them a chance to earn their own incomes.

CFI’s efforts have shown positive results so far. The organization now works with 30 different communities across Pemba, and 80 percent of the people who have taken up new occupations geared toward sustainability saw their incomes rise. To better protect Kokota and its residents from devastating storms, CFI is also working to regrow damaged mangrove forests along the island’s shorelines.

Still, Omar and Melanson say there’s more work to do. An assessment by the World Bank, for example, found that overall poverty on Pemba increased from 48 to 55 percent between 2010 and 2015. And Kokota residents, too, need both better healthcare and food security, which CFI hopes to support with its crop diversity efforts.

Small, poor communities are often the most vulnerable to the effects of climate change, like drought, intense hurricanes, and depleted fisheries. Melanson says Kokota’s environmental comeback is a model that can inform other environmentally at-risk communities. Omar wants to share the solutions they’ve developed on Kokota with other communities living off scarce resources.

“The world needs to start paying attention to places like this, because islands are like microcosms for our whole planet,” says CFI’s executive director Daimen Hardie. “The solutions that are coming out of these regions are the solutions that will increasingly be needed all over the world for the next hundred years, even under best-case scenarios.”