Over One Billion Animals Died in Australia’s Bushfires

The number of wildlife feared to have died in the bushfires ravaging Australia has soared to over one billion.

Chris Dickman, an ecologist at the University of Sydney, said his previous estimate of half a billion was ‘conservative’ and only covered the state of New South Wales (NSW), where the fires began three months ago.

The fires have ripped through the neighbouring state of Victoria and beyond as temperatures of 48C and 50mph winds caused the crisis to worsen.

Professor Dickman said this and groups of wildlife for which there was no population data means the original figure has more than doubled.

He told Huffington Post: ‘The original figure ― the 480 million ― was based on mammals, birds and reptiles for which we do have densities, and that figure now is a little bit out of date. It’s over 800 million given the extent of the fires now in New South Wales alone.’

However he warned that if 800 million sounds a lot, ‘it’s not all the animals in the firing line’ as it excludes bats, frogs and invertebrates.

With those numbers included the number of animals feared to have perished exceed one billion, Dickman said, describing this as a ‘very conservative figure’.

The bushfire crisis has killed at least 25 people, destroyed over 2,000 homes and torched more land than the size of Croatia.

Harrowing pictures and videos have captured kangaroos desperately attempting to flee great walls of flames while rescue teams have been met by the charred bodies of thousands of koalas.

Others reported seeing cockatoos falling dead out of trees and farmers have fled only to return to their burned land and find it littered with the bodies of livestock.

An environmental scientist at the World Wildlife Fund Australia, Stuart Blanch, said one billion was a ‘modest figure’ and blamed the fires on his country’s ‘obsession with coal’.

It is feared entire species may be wiped out by the flames, which have reached Victoria’s Alpine National Park and New South Wales’s neighboring Kosciuszko National Park – home to critically endangered species.

Koalas have been declared ‘functionally extinct’ having lost a third of their key habitat in New South Wales. Dickman’s figures also exclude livestock, which have been pictured lying dead on the roads as the national Defence Force rush to dig mass graves to avoid a health emergency.

he start of the week brought brief respite to the deadly fires when rain and cooler temperatures moved in.

However, the Rural Fire Service warned the damp weather would not put out the largest and most dangerous fires before conditions deteriorated again.

Australia’s prime minister Scott Morrison, who has faced widespread criticism over his handling of the crisis, has announced a $2 billion AUD (£1 billion) funding boost to help the relief effort.

Meanwhile celebrities such as Pink, Kylie Minogue  and Prince Harry and Meghan have donated to the cause. More than 135 fires are still burning across New South Wales, Australia’s most populous state, more than half of which are still not contained and pose a risk to lives.

Devastating pictures taken from space show the catastrophic scale of Australia’s bushfires. Australia’s capital, Canberra, had the worst air quality of any major city in the world on Monday morning owing to smoke from nearby wildfires.

The extent of the smoke is so huge that a huge ash cloud spread over 2,500  miles to New Zealand, causing a thick orange haze to fill the skies. The world has struggled to take in the catastrophic effect of the crisis, with pictures of the sky turning a deep red likened to apocalyptic horror films. 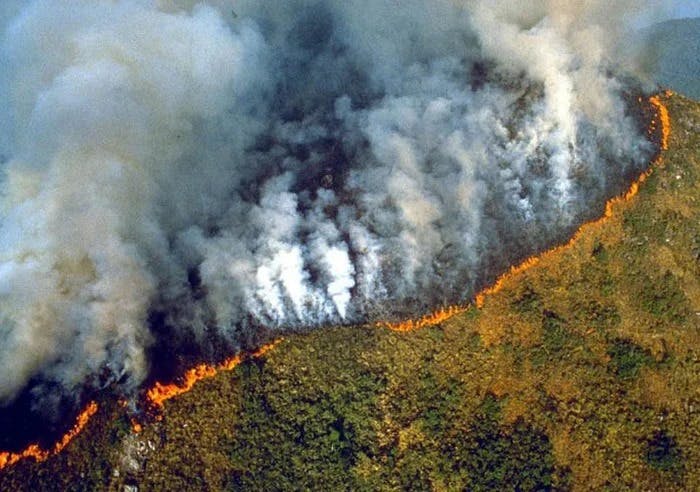