Gambia made a deal with the EU last Friday to sell 3300 tons of its tuna for only 136 euro per ton. Meanwhile, the EU Fish Price Report values tuna at 1.290 € per ton.

Journalist Yusuf Taylor is making shocking calculations and able to ask some questions, you will not believe your ears if you hear what the answers are. Meet the people who are robbing the Gambia.

The ridiculous fishing deal the Gambia made with the EU

Last Friday, the EU and The Republic of The Gambia signed a new Sustainable Fishing Partnership Agreement (SFPA) protocol, 22 years after the previous protocol expired.

The new protocol covers a period of 6 years and will offer EU vessels the possibility to fish 3300 tons of tuna and tuna-like species as well as 750 tons of hake per year in the Gambian waters.

In return, the EU will pay The Republic of The Gambia a financial contribution of 550. 000 € per year. The new protocol will enter into force when the necessary legislative procedures for its conclusion have been completed.

Gainako journalist Yusuf Taylor witnessed the meeting and calculated that the Gambia is selling its Tuna for 136 euro per ton! 1000 kg of tuna for 136 euro?

In Europe it’s barely possible to buy a single tuna for this money, but in the Gambia, Minister Gomez of Fisheries is kept in the illusion that the country made a really good deal with the EU. Without any doubt he is signing the papers.

Meanwhile, the EU Fish Price Report values tuna at 1.290 euro per ton and hake at 1,740 euro per ton. This is a total value of 5.5 Million euros per year at these prices. In the movie the journalist is asking sharp questions. How is it possible that we sell our fish for a ridiculous price?

While asking Minister Gomez from fisheries if he could explain the gross disparity, the minister came up with excuses that totally make no sense.

First another 350.000 euro is paid by the ship owners for fishing licenses for 6 years. The minister is saying it in a way that is sounds like a lot of money. But in fact all these fishing vessels together only pay the Gambia 58.000 euro each year to catch giant amounts of fish! This is again absolutely ridiculous.

Also read: SHOCKING: The Silent Ecocide Of The Gambia

Going on to the next argument. The minister says the fishermen have to pay for their fishing gear, their fuel, salaries etc. The minister is almost creating the feeling that he feels for the fisherman and the costs their companies have to make.

Let’s not forget that we are talking about massive factory ships here. Ships that catch as much fish in one day, as all the Gambian fishermen together in a whole year.

The Gambian minister is even telling that the ships are not even sure if they find fish. This is a problem that Gambian fisherman are facing daily.

But the factory ships instead are equipped with high tech sonar that will find every single school of fish. This argument is pure nonsense and shows the total lack of knowledge of the Gambian Fisheries Department.

Gambia’s fisheries Minister Gomez is proudly saying he thinks he is a very good business man. But in fact he just made a deal in which he stole more than 4,5 million euro from his country.

He should never have made this deal. These are the people that keep African countries poor. Total mismanagement.

It’s truly shocking that people who are thinking this way are in leading a country. This deal is a shame both to the Gambia and both to the EU.

The journalist is attacked by different people who are implicating he is all wrong and is asking stupid questions. In fact journalist Yusuf Taylor is touching

This is how the EU is creating migrants

These are the people who are going to kill us if we don’t act soon. They will run the Gambia straight into a famine. Our fish stocks are depleting completely and our minister just sold another 3.300.000 kg for a bargain.

The EU should be ashamed that it is making deals that are completely unsustainable and not benefitting West-African countries. They should give third world countries a fair price so they can develop their country and create jobs from this money.

We are not far from the moment that the entire fishing sector will collapse simply because of the fact that all our fish is gone. We have enough young and talented people who should get a chance in politics.

Because of Minister Gomez we have three (the fourth is being build) fishmeal factories that are dumping thousands of liters of highly arsenic waste water into our ocean every day.

Somehow the Chinese are allowed to do everything they want. They are bribing everybody they need like local police, village elders and politicians.

Destruction is what they call development

We have totally uncontrolled fishing activities going on in our waters. Daily we get reports of dead washed up animals. Prizes of fish are skyrocketing on local markets are skyrocketing.

People in villages are having problem breathing because of the intense stench from the fishmeal factories. Tourist are staying away from lodges near the smelly areas. Where is the end of all this destruction?

Credits to the outstanding journalism go to Gainako’s: Yusuf Taylor 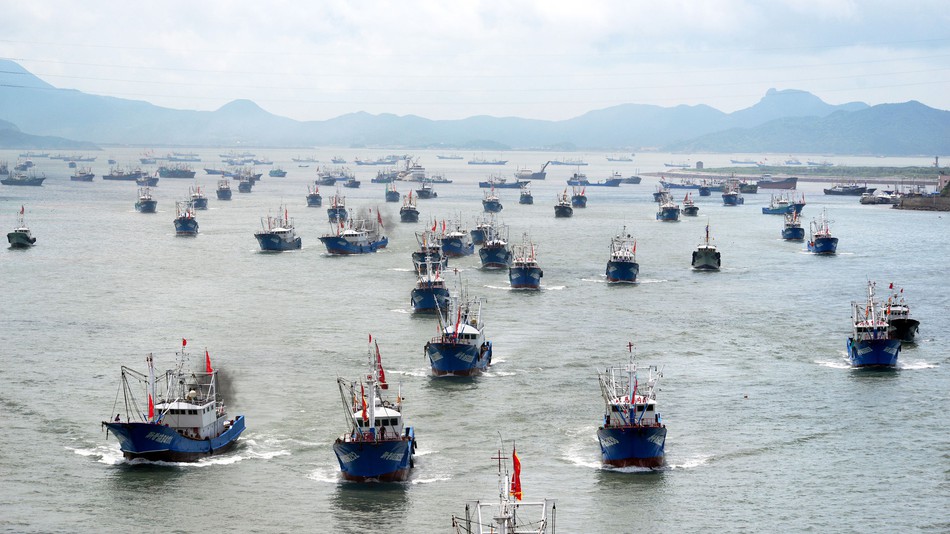